All mundane firearms in Arcanum 1780 use black powder as a propellant, multi-part ammunition and the most common firing mechanism is the muzzle-loading flintlock. See High Tech page 86 (box) for the effect black powder fouling has on Malfunctions. Both smoothbore and rifled weapons are made, and almost everyone uses paper ‘cartridges’. These are a twist of paper containing the lead ball projectile, enough powder to prime the pan, and the propellant charge. The user simply bites off one end of the paper, pours a little powder into the firing-pan, then the rest down the weapon’s barrel, following that with the wadded paper and ball and ramming the whole thing home. Using paper cartridges halves the listed time for re-loading. Riflemen also make use of a “greased patch” to swab the barrel to clear it of fouling faster, and this reduces the time for reloading for rifled weapons by a further by 30%.

Every city has members of the Gunsmithing Guild and most towns will have an artisan gunsmith, but gun-making in Arcanum 1780 is a craft, not an industry. Gunsmiths turn out small numbers of guns at a time, often custom-fitted to owners, and parts are not interchangeable easily. The area around the town of Lancaster in Pennsylvania is particularly renowned for fine gunsmiths, patronized by many nobles an high ranking individuals, as it had an influx of trained gunsmiths from Germany and the Low Countries just before the Event. Guns that are Very Fine (Accurate, or Reliable) (HT p79) will usually come from one of the areas gunsmiths, and will probably be Styled (HT p10) too. Some of the makers are: Jacob Dickert, John Demuth, Joel Feree, Peter Gonter, William Henry and Martin Mylen. 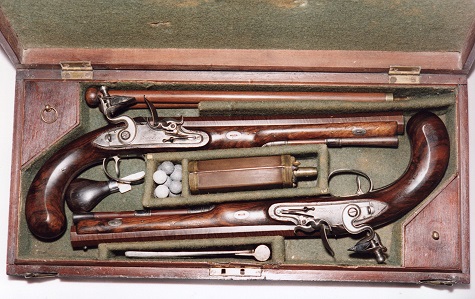 This weapon usually comes with accessories – loading ramrod, bullet mold, powder flask etc – in a wooden box. The pistols are sold in pairs, both in the same box. If a single pistol is found, it’s probably stolen. Often they will be from a quality gunsmith – add Styled and Fine (Accurate) or even Very Fine (Accurate) and /or Fine (Reliable).

A very common pattern of pistol, it features a 12" smoothbore barrel, a hook on the side to hang it from a belt, and a brass cap on the grip. Examples are seen in Royal Navy, Merchant Marine and Brethren service, as well as in the navies of other nations. In action, it can be fired upon boarding then turned around, gripped by the barrel and swung as a club (Swing+1 Crushing, using Axe/Mace Skill)

Another very common smoothbore pistol, this time with an 8.25" barrel for using from horseback – although it is also popular with Army officers even when on foot, and with Rangers. It fits into a holster, often a brace of them across the saddle of a horse, but has the same heavy brass capped grip as the Sea Service pistol – and for the same purpose. 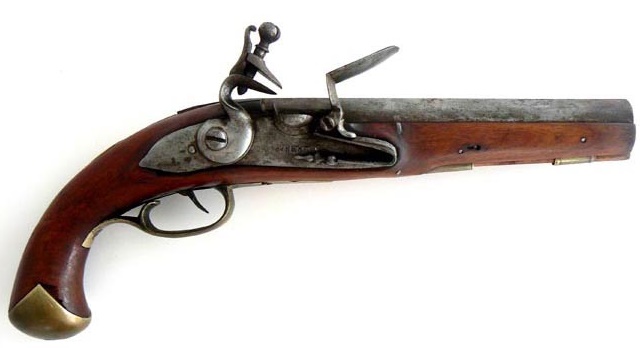 Also known as the “Travelling Pistol”, this smoothbore weapon is designed to fit inside an overcoat pocket, small enough to be concealed but still packing a hefty wallop. A true gentleman will of course spend the extra for a styled pistol. 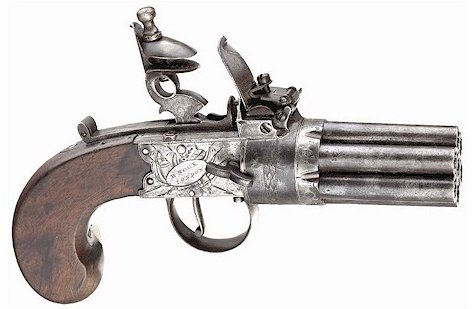 A short-barreled smoothbore weapon, designed to be carried in an overcoat pocket or small belt holster. Each time the user wants to fire it, he or she would have to turn the barrel, then open the pan and put some priming powder in, then cock the lock and then pull the trigger to fire. The weapon fires the barrel that happens to be at the top-most position when the trigger is pulled. The advantage of this over a single barrel pistol is that the user saves the time of loading a new ball and powder each time, as this can be done in advance for the six barrels. Handy if it works, but the pistol is notoriously unreliable.

Supposedly patterned after a weapon made at the Tower Of London in the mid-1600s, this smoothbore weapon has a wide, flared muzzle. It sees use in civilian hands as a self-defense weapon and at sea to repel boarders. The bell-shaped mouth doesn’t spread the shot any better, but looks intimidating. It does make loading easier – especially on the seat of a bouncing coach or while perched on swaying crosstrees (+2 to Guns rolls to reload; see Reloading Your Gun, p. 86).

These weapons are made by the finest gunsmiths to the highest quality, for gentlemen as hunting pieces. They often have features such as waterproof locks and platinum vents (Fine (Reliable)) and may be custom fitted to their owner (Weapon Bond).

A medium length smoothbore musket, this is the most common type seen in civilian hands as well as being sold to the Iroquois and other tribes allied to New Britain. Usually of fairly simple workmanship.

A shorter barreled (42") military musket, designed for dragoons but also used by Marines and the Navy, Buccaneers and the like. It takes a 1.1 lb socket bayonet (Reach 1,2*)

With a 48" barrel and a total length with bayonet fixed of 6’2", this long smoothbore is the standard infantry weapon of the New British Royal Army and the design is also sometimes seen in civilian use. The bayonet is 0.6 lbs (Reach 1,2*).

A smoothbore flintlock carbine with six additional barrels welded around the central barrel in a hexagonal configuration. Small vents permit the flash of the central barrel firing to ignite the charges in the others. The gun is 37” long overall with a barrel length of 20”. It’s unreliable, heavy and has a kick like a mule, but when it works it can be a devastating weapon.

1 Unreliable, Malfunctions on a 15+ (Basic p407).
2 Due to the massive recoil, if fired from the shoulder the wielder takes 1d-3 cr damage each time a volley is fired. If fired from the hip, the user takes no recoil damage but it drastically reduces Accuracy to -1.

The weapon that made the reputation of the gunsmiths of Lancaster County, it is a long-range hunting weapon based on German designs, with a rifled barrel. Greased patches are commonly used to combat fouling of the rifling, and these are kept in a small compartment with a spring-loaded lid set into the butt. These weapons are seen all over New Britain, but especially among hunters, pioneers and scouts. Many are Styled and of higher than usual quality.

Recently, the Royal Army decided it needed a heavier rifled weapon for the Rangers and proposed experimental “Rifle Regiments”. This is the Lancaster Gunsmith Guild’s response – heavier than its classic weapon and with less range, but rugged, reliable and capable of taking a 2 lb sword-bayonet (Reach 1,2*) that features a full knucklebow (counts as brass knuckles) so it can also be used as a shortsword when not fitted to the weapon. The Royal Rangers are trying the weapon out.