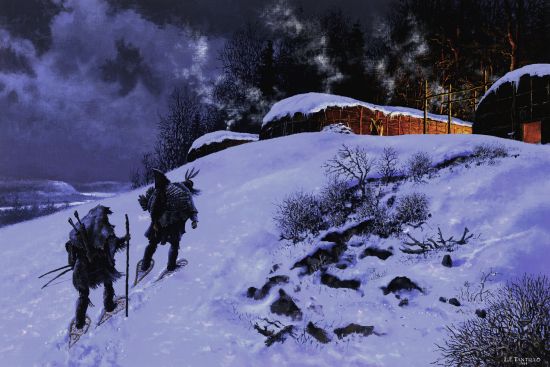 The Parliament of 1754 that established the Kingdom of New Britain made special mention of treaties made with the Kingdom’s allies, the Iroquois Nations, and established a large area of territory as ‘off limits’ to New Kingdom expansion as the Iroquois’ own territory, to be protected by New Britain’s armed might should that become needed. The seriousness of this treaty was hammered into the minds of New British citizens in the failed 1776 Cherokee Invasion, where the Crown sent Skyships, Royal Rangers and Haudenosaunee warriors to stop a rouge army of British militiamen that thought the prime timberland would be an easy conquest.

The main Nations of the Iroquois confederacy are the Mohawk, Onondaga, Oneida, Cayuga, Seneca, Cherokee and Tuscarorall, with members of dozens of other tribes woven in during The Great Assimilation. All told, there are probably around 20,000-25,000 Iroquois spread throughout their territory (not including the more “proper cities” of Detroit and Onondaga Crossroads), but no-one is entirely sure. Due their habit of adopting conquered people into their tribes, many if not most of these Iroquois are actually of other Native American or even European ancestry.

The Iroquois and most Iroquoian peoples have a matrilineal kinship system; with descent and inheritance passing through the maternal lines, and children are considered born into their mother’s clan. Their clan mothers, or elder women of each clan, are highly respected.

The “nations” of the Haudenosaunee handle themselves as British counties, where each village has a chief that reports to the High Chief of the Nation, who in turn meets at a special Council of the High in the capital city, Onondaga Crossroads, for matters that affect the entire protectorate and also for major holidays and other cultural ceremonies. The Grand Elder (a confusing title, as it has no age requirements) serves as the final word in matters of the Council of the High.

As is typical in British counties, each “nation” has a democratically elected representative in the House of Commons. Although the MP is democratically elected, High Chiefs break ties and have a limited veto power; for all intents and purposes, the High Chiefs are considered nobles under British law, and the Grand Elder is in theory considered equal to an Earl. In a very interesting deviation from British Law, any Haudenosaunee government official may be impeached by his representatives, his replacement to be voted on solely by the women of the constituency, as the men were obviously in error when they placed him in the position.

The Haudenosaunee Protectorate lies south of the Great Lakes, bordering Hudson Shire in the North and the Shires of Pennsylvania and Virginia in the East it extends south as far as the Ohio River and West as far as the Mississippi (and technically beyond, although the Dakota Sioux have so far resisted that expansion – on occasion the Crown has sent small units of troops to aid the Iroquois in taking parts of that land by force).

(In Our-world terms, the Protectorate covers the States of Ohio, Indiana, Illinois, Michigan and Wisconsin – Onondaga Crossroads is in what would be Milwaukee)

This vast area is largely pristine wilderness, not quite the more hilly original lands of the Iroquois but suitable for their needs, and is dotted with tribal longhouse villages, often built on artificial hills surrounded by wooden palisades, in the Iroquois style growing corn, beans and squash as well as hunting for meat and gathering wild foodstuffs. From their new lands, the tribes trade furs, timber and art goods with New Britain in return for muskets or rifles, steel knives, textiles and iron cookware.

Scattered throughout the protectorate, particularly at major river flats, are “white stick” towns, communities of Iroquois that are living typical British lifestyles. These towns have their own small industries and follow the standard British laws, though they are still nominally subjects of the High Chief of their territory.

The inhabitants of the Haudenosaunee Protectorate are a special case in New British law. They are able to serve in the Armed Forces and hold rank there, but not in other government positions, nor do they vote as New British citizens do. If an Iroquois works and lives in New Britain, they will find they do so under a Social Stigma (Second-class Citizen, Iroquois) [-5].