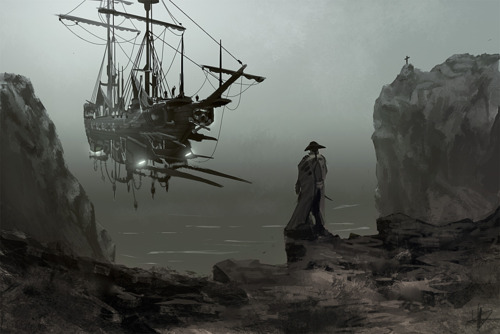 H.M.S. Dryad is an SM+7 brig of 210 tons measuring 93 feet length and 28 feet beam, armed with 18 smaller cannon (16x 6 pndr and 2 long nines as bow-chasers). An older design powered only by sail but with a keel designed for aerial boarding (which incorporates two barbed rams and extra tackle), she’s now 12 years old and still flying. Internally, she’s pretty standard: an orlop deck, a gun deck and twin gangways above the gun deck, with twin full-rigged masts and a +7 Franklin Engine and Rittenhouse Lifters. These are tucked away on the orlop at the aft end, permanently guarded by one of the ship’s 12-man Marine squad under a Sergeant. All told, the ship has a crew of 86, comprising a 1st Lieutenant as Commander, 2 junior Lieutenants, 5 midshipmen, 12 marines, and 6 mates supervising 2 watches of 30 crewmen each. It’s current Commander is Ltnt Mykes Oliver of Philadelphia, son of a merchant sea captain.