Ranged combat is a concept that was developed across cultures to suit particular needs. While the bow is a common form, what makes them unique is how each culture perfected this form, and for what purpose. Whether hunting man or beast, the bow gave those skilled enough to master it a lethal edge. 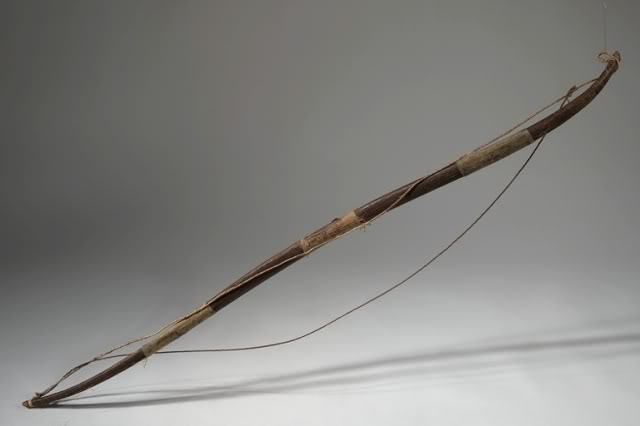 A short flatbow, made from a single stout and flexible piece of wood, this is a nimble shortbow, capable of being used on horseback or under cover of thick scrub brush.

A bow with a gentle curve to it when it is unstrung, under tension it becomes a deadly instrument. Typically used while on foot, the additional length gives better precision, allowing for more precise shooting.

The Shoshone have taken the flatbow concept and enhanced it by layering materials of wood, horn, and sinew, to create a bow of significant strength without requiring the length of a longbow.

Crossbow
A crossbow uses ingenuity and mechanical advantage to deliver more power in any individual bolt than a bow is able to. The tradeoff, of course, is that the bow will fire many more arrows in the time the crossbow reloads, so the engagement may turn against you if your first shot goes awry.

† Weapon requires two hands.
3 An arrow or bolt for a bow or crossbow is $2.

1 Follow-up drug or poison attack if damage penetrates DR. Effects depend on the poison used.
2 Requires two hands to ready, but only one hand to attack.
3 A dart for a blowpipe is $0.10

Sling
A sling is simply a thong with a pouch, used to hurl projectiles – usually small stones – at great speed. With the advent of Ur-Ice upon the world, stones may not be the only things hurled through the air.

† Weapon requires two hands.
2 Requires two hands to ready, but only one hand to attack.
3 A shaped sling-stone is $0.06. Unshaped rocks and stones suitable for slings or heavy slings can be found for free, but they’re less accurate: -1 to hit
9 Can fire stones or lead bullets. Lead bullets give +1 damage and double range.

Ocassionally the reach of any given weapon is surpassed – where axes fall short in a swing, they can be thrown significantly farther. There are a few downsides to this, particularly if you miss, but throwing weapons have been a staple of hunting since the beginning.

Chakram
Possibly the most unique of thrown weapons, the chakram is a small metal disc, native to India, sharpened on the outside and blunt on the inside. It is a tricky weapon to throw, but can be used to deadly effect.

Bola
A simple construction of weights and rope, bolas are another tool developed across many cultures – they are used to capture animals or humans by entangling their legs, or potentially disabling their arms.

† Weapon requires two hands.
4 May entangle or ensnare the target.
10 Not balanced for melee combat. -2 to skill (gives -1 to Parry).

by: RaseCidraen
See All Pages