On the morning of January 10th, 1741, fire and ice rained down from the heavens as huge chunks of a disintegrating comet exploded in the air or upon hitting the ground.

The Gomorrah Event devastated Europe and the Middle East in particular – in a wide swathe of fiery destruction that laid waste to a vast area from Mecca to the Irish Sea and from Moscow to Gibraltar. Instantly, Colonial Europe along with the brightest fruits of Islam and the Ottomans were gone, consumed by the force of a thousand Tunguskas. Millions perished in the fire and blast waves. 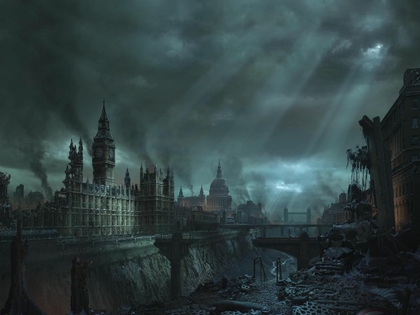 Elsewhere, fragments impacted in Western Australia, in Antarctica, in the frozen wastes of Canada and a dozen other places – each bringing destruction and change. The icy dust of the comet’s disintegration covered the world in a thick blanket for three years, cutting the sun to a dimly seen orb and bringing harsh winter everywhere. Millions more died of starvation and from the plagues the devastation brought with it.

In the aftermath, the survivors found themselves in a world changed even more than they’d thought. The comet’s icy core proved to be made of a strange new substance, an ur-ice that didn’t melt except at temperatures most often seen in a furnace and that had both the consistency and strength of quartz crystal. This strange substance also possessed one other weird property – it contained the raw stuff of magic!

Ur-ice chunks and dust had been scattered all across the globe, most thickly near the major impacts. People, creatures and even plants absorbed the dust, or simply lived too near a chunk for too long, and changed. Strange magical creatures appeared, mutated from common animals. People became able to feel and control these magical energies – becoming witches, wizards and sometimes even stranger things – vampires and werewolves among them. In Europe, the myriad dead rose from death as zombies, some with more will than others who were able to control the rest. Magic warped the weather, even the land itself.

The European colonies in the Americas, Africa and the Far East became the last bastions of what would, in our own timeline, have gone on to rule the world. Through hardship and hard fighting, they’ve mostly managed to survive and even thrive, as well as tame and channel the new magic. But they must compete in this new world with other challengers for the role of world-ruling paradigm. The Marathas of India, the Chinese Empire, and other smaller polities will contest the stage of this new world with them.