In 1740, just after the The Gomorrah Event, an Onondaga shaman named Canku Ota had a powerful vision: A Winter unlike any in Haudenosaunee memory would sweep the land, and the way his people chose to deal with it would change the world forever.

If the Haudenosaunee were to band together and hold out in isolation until the Great Winter passed, they would survive – for a time. The White man would suffer the most, unfamiliar with living off of land in what they called ‘the new world’. Other tribes would fight over resources, fighting like hungry wolves over the smallest scraps just to survive. When the winter passed, the forests would be full of pockets of cannibalistic savages that lost any sense of honor the Great Peacemaker had given them so many ages past. The white tribes would be all but destroyed, but the survivors of the British would form two main factions, the red and the blue. It would not be long before the men in blue used wit and guile to form an unbeatable army, and then forge the greatest empire the world has ever known – but at a great cost – forests would burn, rivers would run black, and the armies of blue would kill so many natives that they will be all but extinct – kept alive on small plots of land like farm animals.

As word spread among the tribes of Canku Ota’s vision, the great chiefs of the Haudenosaunee worked to fulfill the prophecy – the other tribes would be assimilated, either through the hearth or by the musket, and the aide would be sent to the British to help them survive the Great Winter. Skirmishes were common as pockets of resistance formed, but between the growing Haudenosaunee army, the ravages of the Great Winter, and the emergence of terrible beast of legend, most of the tribes of the north east were either assimilated or pushed out of the area by the time of the New Spring, when the Great Spirit appeared as a six-tailed hawk of white fire over the skies to profess his approval of the Great Assimilation.

Ten years after the end of the Great Winter, the British regained enough strength to return to their focus from merely surviving to rebuilding a mighty empire, and as predicted in the prophesy, the Haudenosaunee Protectorate was set up as an alliance between two great nations whose fate was forever intertwined. Though moved far west of their original territory, the Haudenosaunee actually gained land in the deal. 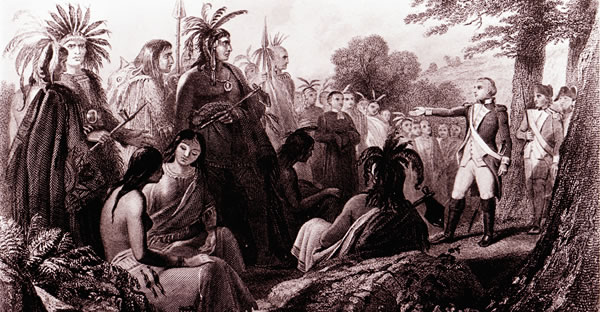 In the spring of 1763, An Odawa warrior named Pontiac managed to gain nearly a thousand warriors from various hold-out tribes through powerful speeches based mostly on exaggeration of abilities and promises he had no way of keeping. Pontiac led these warriors on a siege of Detroit, but between the experienced soldiers manning the wall and the fierce Haudenosaunee patrolling the surrounding areas, Pontiac’s men were pinned by two superior forces. Pontiac managed to escape, two-thirds of his men did not. Not one to let reality stand in the way of his own legend, Pontiac spread word of success among the tribes and by June the epic Lacrosse Massacre of Fort Michilimackinac shocked the British, Pontiac took credit for the deed – though he was nowhere near the event – and the British turned their focus to what they thought was the charismatic war-chief representing all of the holdouts, an image Pontiac worked hard on cultivating. After a few years of living as a folk-legend, Pontiac was killed by his own men, his head used as a peace offering to the Haudenosaunee force Pontiac’s men surrendered to. The holdouts in the area quickly followed suit, the rebellion dead but Pontiac’s legend lives on in highly exaggerated folk songs in an almost Guy Fawkes air of fallen heroes.

About decade later, in 1776, a horde 6,000 militia men banded together and went against the non-expansionist treaties of the king and invaded the Cherokee lands. 36 towns were razed by the rouge army before they were surrounded by the British Army and Haudenosaunee warriors and the great skyships of the British Navy. The rouge militiamen were returned to their homes, their leaders tried and mostly hanged, and the Cherokee became the last of the major tribes to agree to the Great Assimilation.