The Seminole are a peculiar nation of natives – not only their special ignored status under British law, but also in the fact that they didn’t exist before Europeans came to the new world. The word Seminole is a corruption of cimarrón, a Spanish term for “runaway” or “wild one”, as the original Seminole bands formed from people of the Creek, Mikasuki and Choctaw nations unhappy with how their tribes were dealing with the foreign invaders. The name became more fitting during the dark days of the slave trade, when Seminoles used guerrilla tactics to free slaves as well as taking in any escaped slaves that could make their way to Seminole lands. With a hodgepodge of cultures building a new society in a dangerous landscape, the Seminoles adapted and changed the ways the built, hunted and farmed, forming an entirely new culture in a relatively quick time.

When the Spanish held Florida, Seminoles were able to hold the army out of the inland swamps better than any native force in history – legends quickly spread that bands Seminoles were like swamp-ghosts, known as the Shark-Tooth Hunters, able to fade into wetlands and kill without a trace. While many of the legends must have exaggerations, it is a fact that Spanish Conquistadors armed and armored with firearms and the best steel in the world seldom returned from expeditions against the Seminoles. 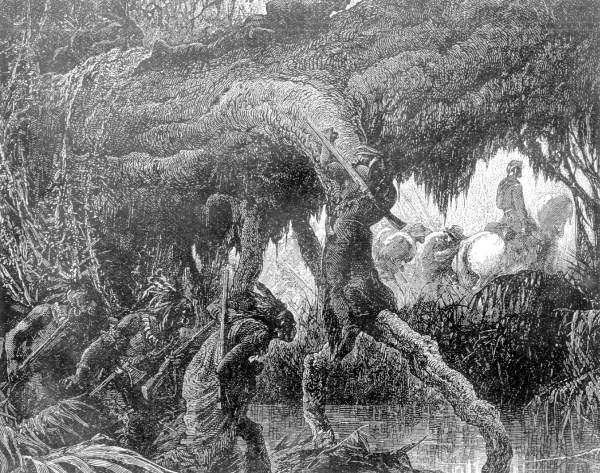 When the Spanish lost Florida to the British, the forces of New Britain expected to sweep across the wild-lands expanding territories the way they did everywhere else. The were mistaken. While the established Spanish coastal ports and fortresses fell the way the British expected, the expansive wetland swamps known as the Everglades seemed to be impossible. The legendary Seminole Shark-Tooth Hunters proved to be more than even the mighty British could handle. At first, determined generals were set on eliminating them as a matter of pride, but as the death toll rose, with no real indication as to how many Seminoles there actually were, a decision was made to leave the Everglades, which were full of dangerous beasts and useless to British methods of farming and building, to these elusive people and basically ignore them. In all official records, all of Florida is part of New Britain, but the Everglades are an official no-go zone.

In the decades since the truce, no large armed force has ventured into Seminole lands, and no Seminole bands have creeped into British settlements to kill soldiers in their sleep, so the unofficial truce is seen as a success. Villages exist on the outskirts of the Everglades, where happy people in vibrant clothing hunt, fish and farm and are more than happy to trade exotic meat and fruit for multicolored cloth and metal goods. It is obvious that some of these villagers venture deeper into the Everglades, but any talk of the deep swamp or it’s mysterious Shark-Tooth Hunters seems to be a strong taboo.

Occasionally, brave souls venture into Seminole land – the exotic wildlife is tempting to both hunters and explorers. Some report vibrant villages of stilt-houses, known as chickees, while others claim every village the came across was deathly silently, but all who return claim to have felt a presence watching them the entire time they were there.