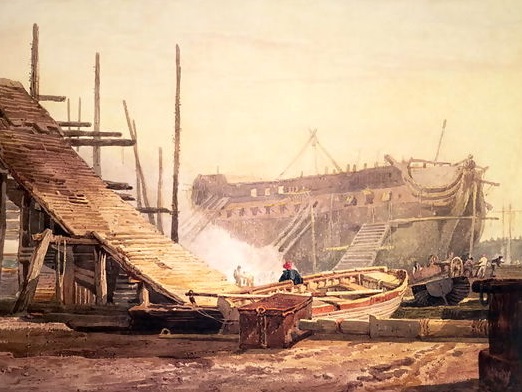 The Shipyard at Wallabout Bay is one of the several reasons that New York City is overspilling its old boundaries on Manhattan Island into the surrounding countryside. Situated at the head of Wallabout Bay, on Long Island and directly opposite Corlear’s Hook on Manhattan, the 40 acre shipyard has become the premier Skyship building yard in New Britain.

The yard itself is largely covered from approach by the sea by extensive shallows extending right across the bay, through which channels have been dredged – and only select pilots know where those channels are placed. Launch ways have also been dredged close to shore, where completed Skyships can float while their rigging and armament are brought aboard and fitted, but the ships themselves fly out of the yard. The approaches, both to landward and from the bay, are covered by two artillery forts manned by Navy gunners – and a garrison of Navy marines provide security. A Navy Post Captain is in overall command.

Many workers live in Manhattan and commute via a daily ferry, whereas others live in worker’s housing which has sprung up into a small township beside the yard itself. Both landward and seaward entry to the yard itself is controlled by a strict system of tokens, and the yard is still small enough that the loyal workforce largely recognise each other.

The yard has sufficient room to work on three full ships of the line at any time, or up to six smaller vessels. It takes about two years from order to completion to build a ship of the line and this has meant that the Admiralty has recently ordered the yard be expanded to be able to handle the construction of up to eight full-size vessels, length around 180 feet, at any time.